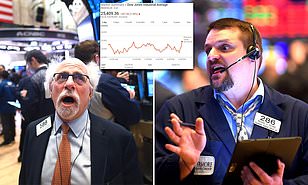 If you read columns by financial advisors or listen to their radio shows or podcasts, you will find no shortage of bullish prognosticators who will tell you that if you patiently leave your money in the stock market for many years, you can expect a rate of return of 10%, 12%, even 18%. Dave Ramsey, for example, says: “The current average annual return from 1923 (the year of the S&P’s inception) through 2016 is 12.25%.” The Investopedia claims: “According to historical records, the average annual return [of the S&P 500] since its inception in 1926 through 2018 is approximately 10%.” In my judgement, these numbers are wildly inflated.

A better starting place to understand the performance of the marketplace is the work of Professor Robert J. Shiller, a Yale University professor of economics and winner of the 2013 Nobel Prize in economics.  He’s also co-creator of the Case-Shiller Housing Index, and he has spent much of his professional life mining data to deflate hyperbolic claims from the financial industry.  His bestseller, published eight years before the financial meltdown of 2008, was presciently titled Irrational Exuberance. On Shiller’s web site, you can find the historical performance of the Standard & Poor’s index every month since it started in 1926.  He also uses other available information to extrapolate performance of the stock market, month by month, since 1871.  He provides data on inflation, prices, and dividends.  If you adjust for inflation and add dividends, the average rate of return on the stock market in any given 12-month period, from 1871 to today, is about 8%.

Here is a spreadsheet I prepared using Shiller’s data, and I encourage my quant readers to review my calculations and spot any errors.

Bulls are convinced that technology, ingenuity, and American entrepreneurial energy will push this 8% number higher.  They believe that the past need not dictate the future. A new era of turbocharged capitalism lies ahead, spurred by the entry of billions of new people into the global marketplace.  Just look at the spectacular performance of the stock market since 2008.

To which the bears say, “bull!”  The future could be quite grim, with a climate catastrophe, new pandemics, food and water shortages, and so forth.  Shiller himself said recently: “We’re launching a trade war. Aren’t people thinking about that? Is that a good thing? I don’t know, but I’m thinking it’s likely to be bad times in the stock market.”

Personally, I’m with the bears, but not because I’m an alarmist.  It’s because the 8% return suggested by Shiller’s data must be understood with a bunch of footnotes.  First, we are at a historically high point of the market. If you start counting at 2010, after the financial crisis of 2008, the average return has been a whopping 11.6%. If you start counting in January 2000, which means your data include the NASDAQ collapse as well as the 2008 crash, the average annual return since has been about 5%. So the true number is somewhere between 5% and 8%.

For most investors, there’s a transaction cost of 1% or so per year associated with buying, trading, and managing the securities (if you haven’t done so, please read the fine print in your mutual fund annual reports).  Many of the gains in Wall Street’s early years also reflect most large companies paying dividends of 5% or so per year. Today, most large companies do not pay dividends at all, and if they do, they are significantly smaller.

Next, consider that the 8% number reflects a perfect stock portfolio, left in perfect index funds, for the perfect long-term where no timing mistakes are made.  None of us, sadly, are perfect, and enter and exit at moments dictated by our beautifully imperfect lives.

Finally, consider that most of us invest in the stock market by picking stocks or investing in several “expertly” assembled portfolios available through our mutual fund or retirement fund.  The vast majority of these funds underperform the market in any given year; over five or ten years, nearly all of them do.  If most fund managers underperform the stock market averages, so will you.

Given this, I would argue that to match or beat the global markets, a local investor should target a return of 5% per year. By comparing local investments with high-risk stock investments rather than low-risk bonds, money market accounts, CD’s, and so forth, I’m creating a pretty demanding standard for local investors. (If I chose the low-risk alternatives, the local investor would be happy with a 2-3% annual return.) That said, as I’ve shown in many of my previous blogs, there are many local investment strategies—eliminating credit card debt, buying up your kid’s student loan debt, becoming a home owner, paying down your mortgage faster—that can reliably generate more than a 5% annual return.

You might decide you’re slightly more bullish or bearish, but the important point is this:  Having a baseline of comparison of 5%, give or take, leads to dramatically different expectations and decisions than having a phantasmagorical baseline of 10%.  It opens up all kinds of local investment opportunities you otherwise would have overlooked.

I’m tempted to end the blog here, but I feel duty-bound to add a confession.  In my earlier book, Local Dollars, Local Sense, I put forward many of arguments I still stand by today—except one.  I wrote, “Between 1871 and the end of 2010, a composite of all the stocks listed by Standard & Poor’s generated an annual rate of return of 2.6 percent.”  As I’ve done here, I prepared a spreadsheet, ran it by a bunch of numbers geeks, and was confident in the calculations. But as I began writing my latest book, I revisited that spreadsheet and spotted a glaring error in one of my formulas.

So today I come clean with you, dear readers.  I now am convinced that the historic average return from Wall Street is significantly higher than 2.6%.

Weirdly, though, it doesn’t change my main arguments.  Then, as now, I suggested that a reasonable goal for local investors should be to achieve a steady 5% rate of return.  And I also began Local Dollars, Local Sense with a proviso that I advise you still to follow:  “Even though you will find lots of numbers in these pages—all of them triple-checked—I encourage you to treat all of them with skepticism, especially various claimed rates of return.”